Les Gets has won three awards for the best family ski resort in the world.

Les Gets has rafts of awards on the shelves. Not only as a great resort for families, but also for the childcare options too. Whether you’re looking for chalets with childcare or ad-hoc options in resort, Les Gets has an abundance to choose from. 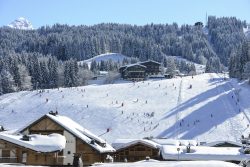 Most chalets are within a 10 minute walk of the pistes

The slopes of Les Gets are spread out in such a way that there is normally a lift or piste within 10 minutes of you. The main areas are Mont Chéry, Chavannes, La Turche and Perrieres; the newest lift. Whilst the Chavannes, La Turche and Perrieres take you into the main ski area of Les Gets (and on to the rest of the Portes du Soleil), Mont Chery is a ski area in it’s own right (similar to Roc d’Enfer near Morzine). Mont Chéry is great on busy days as it is often extremely under utilised!

One of the highest resorts with grass rather than rock

Leave the ‘rock hoppers’ in the rack. Even when the snow thins towards the end of the season, you can still ski most of Les Gets.

The first single-person chair lift was opened in 1938 with Mont Chéry opening up in 1954. The name comes from Savoy dialect “gitte”, or the french word, “jets”; a term that describes the corridors through the trees on the mountains that loggers would bring their logs to the village through. Logging was the main activity of Les Gets before it became a tourist resort. There are still several sawmills in operation and part of the village is still heated by a wood boiler!

Short queues and many lifts

Even during school half terms and at Christmas and New Year, the queues for lifts rarely keep you waiting. And if it does get overly busy, we’d recommend heading to Mont Chéry or Nyon in Morzine, which can be skied to from Les Gets.

Just a one hour transfer from Geneva

Les Gets is extremely close to the Swiss border and Geneva airport meaning it’s great for families with young kids or for short breaks when you want to maximise your time on the slopes.

As well as easy access to the nursery slopes in the village, Les Gets as a resort has some great ‘cruisy’ runs. Part of the ski area is know as the Ranfolly Bowl – this area is perfect for families and groups of mixed abilities as the bowl has a mixture of blue and red (and one black) runs that all meet in a bowl at the bottom. All of the lifts start in the bottom of the bowl too making it a great rendezvous point and keeping the group together without much separation. 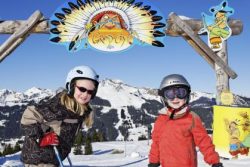 This is where the 650km of pistes comes in. From Les Gets, it’s possible to ski to Morzine – you can then get a short shuttle (or walk) to a lift that takes you into Avoriaz, where you can ski to Chatel, Les Crosets, Morgins and Champery. For the more advanced skier, head to the Swiss Wall in Les Crosets and for the children, head to the Milka and Indiana Villages. 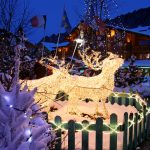 At Christmas, Les Gets goes all out with 15 days of events such as the Elf Workshop, the Christmas Market, Ice sculpture shows and the arrival of Father Christmas on the 24th. During these days, you can also visit Santa in his enchanted forest.

The best mushers in the world race around Les Gets

Ski down a slope dressed in a white suit through clouds of (natural) paint. Great fun!

Free gigs on the pistes. Everyday (or most days) for a week, there is a gig on the pistes in a different resort. Don’t expect One Direction or Oasis, but previous lineups have included The Klaxons. 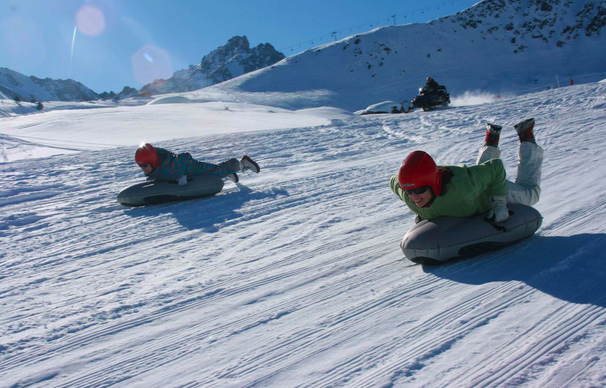 20 super cool things to do in Courchevel!

Where to Ski Late Season